KORE’s focus of effort was the newest truck in the stable – the Stock Full Class vehicle powered by a 5.7 liter Hemi motor.  Its first race garnered a 2nd place finish in the 2007 Baja 500.  Then electronic engine management issues ultimately caused a full engine seizure at her next race, BITD’s Vegas to Reno.

Between Vegas to Reno and the Baja 1000, brush fires ravaged San Diego County, home of the KORE race shop and all personnel.  Mandatory evacuations forced the shop to close for almost two weeks, throwing the race program off schedule at a critical time. 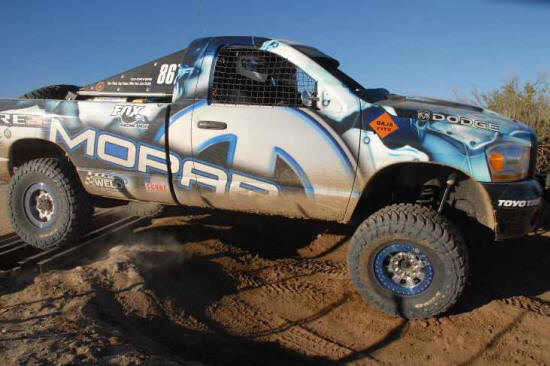 “Despite the time constraints, we replaced the original motor with an XV Motorsports built 5.7 Hemi that uses all-forged internals, a trick XV aluminum manifold and Holley carburetor, so fuel injection couldn’t mess us up again,” said Kent Kroeker, owner of KORE.  “Now we’ve got a bulletproof power plant that does what we tell it.”

With only four days of testing, KORE was confident they had a winning combination under the hood.  The team relocated to Baja.  All was in place for a solid race.  Then while prerunning near Santo Domingo in the famous KORE Beast, Kroeker hit a rock that snapped every steering component in the blink of an eye. This sent the uncontrollable truck containing Kroeker, KORE Engineer Keg Parker and Toyo Tire rep Jeff Bootz up an embankment and into a full barrel roll with The Beast landing on its roof.  Nobody was injured in the rollover, but the extraction process was arduous and time consuming, bringing an exhausted crew back to Ensenada just a day before the race. 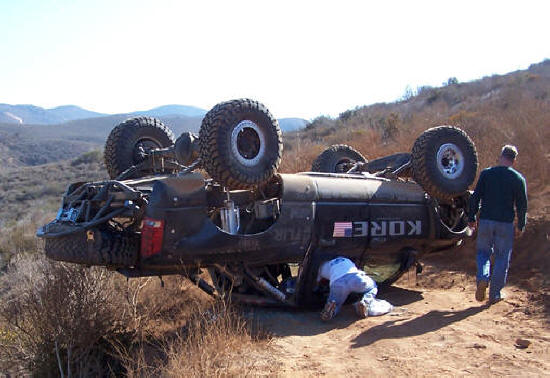 “It was unbelievable what we did to get that truck out.  It was destined for Dakar next year, so we had spare parts, tools, a winch and air compressor on board.  With the help of some Mexican locals, we used every trick in the book to right the truck, turn it around and get it safely to town.  The steering knuckle was snapped in half.  We used about 30 hose clamps to hold the lower ball joint in place – then we drove it out!  It was amazing,” said Toyo’s Jeff Bootz. 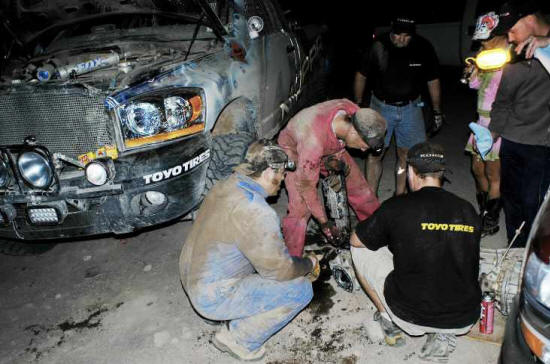 Recent rain made for perfect conditions on race day.  Team Desert Assault was placed strategically down the peninsula.  With Kroeker in the right seat, legendary off roader Malcolm Smith drove a flawless 200 mile start to KORE Pit One at Santo Domingo. Arriving in good position, he handed a perfect truck to Rodolfo Iribe and Keg Parker.  Rodolfo “Rudy” Iribe proceeded to pass everyone in the class, bringing the KORE Hemi to San Ignacio in the lead 13 hours later.

Now, with the most technical sections behind them and room to let the truck breathe, John Zambie and “Happy” Jack Ruddy quickly put 30 miles on the Stock Full arch rivals and eventual class winners, GM’s Team Hummer.

Then, in the lead at race mile 870, disaster struck.  The transmission that had been working perfectly during the entire race showed a rapid and irreversible temperature spike from 140 degrees to 250 degrees and gave up the ghost immediately.  Since the spare transmission was not readily available at KORE’s Loreto North pit, the team pulled a transmission from one of the chase vehicles and installed it in the race truck.

Several hours later with the tranny swap complete, Darren Skilton and Glen Plake were back on the gas, racing south still looking at a podium finish.  But within ten miles the replacement transmission failed.  For the next six hours the team worked frantically to find the cause of the problem, eventually coming to the conclusion that the interface between the computer and fully-electronic transmission had failed, causing both transmissions to commit suicide.  At 5 AM, after 15 hours of work, all resources exhausted, dead in the water and unable to make the next check closure, Kroeker called the race. 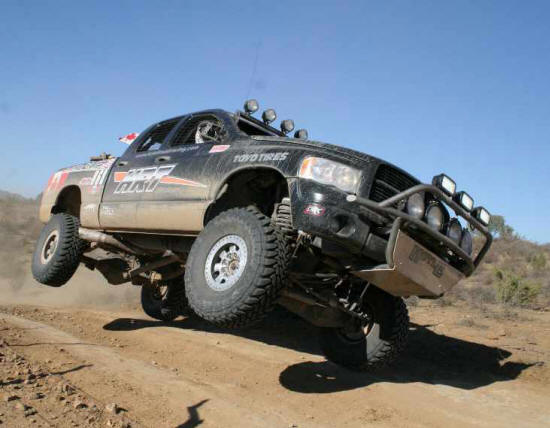 Near Loreto, the Canadian team of HRT replaced a blown turbo, a recurring curse that thwarted their 2006 Baja 1000 effort.  Previously running strong in Second Place with few problems besides a quick lower control arm replacement at El Crucero, Kevin Ostlund, owner of HRT was anticipating a strong finish.  Then out of nowhere the truck’s turbo imploded.  Troubleshooting revealed that the co-driver had lost track of a loose rag that inadvertently clogged the in-cab air filter.  Fortunately the Canadians had prepared for the worst and had a spare turbo charger on board.  After only a couple of hours of down time, they were back on the trail at 100% power, bringing the truck across the finish line for Fourth Place in Stock Full. 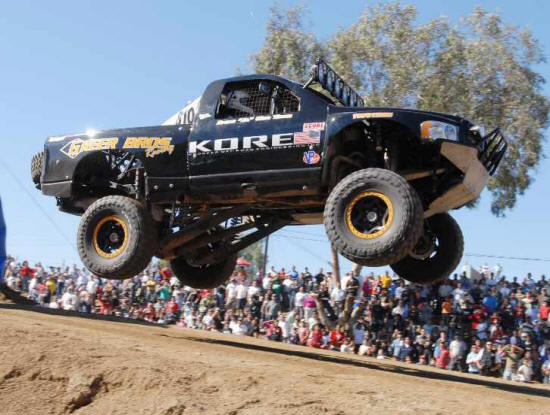 Team Tennessee remained undaunted after rolling one of their trucks during prerunning.  Detailed preparation and solid logistics placed their two trucks in good position as they thundered down the peninsula.  RPM’s first truck piloted by Clyde Stacey charged southward at a steady pace finally getting across the finish line for Fifth Place in Stock Full.  Fuel troubles early on slowed the pace of RPM Off Road’s Justin Matney, but the team continued, running the entire race with only 2 psi. of fuel pressure!  RPM’s second truck eventually rolled across the finish line, but not before the clock ran out. 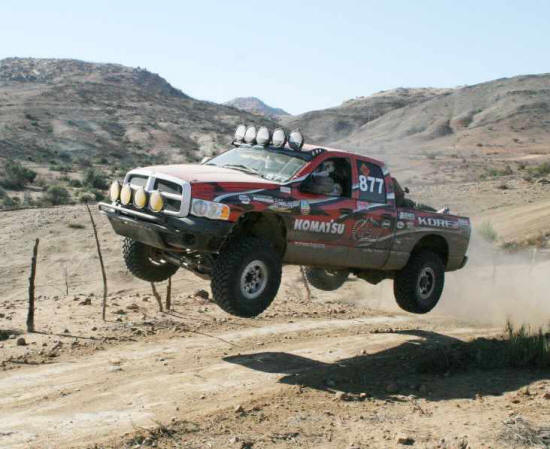 Three hundred miles south of Loreto, the KORE/Greer Class 8 truck was stuck in deep silt.  Precise driving by Thom Greer had brought the 740 horsepower Mopar monster to Chapalla in a solid second place.  Fresh tires and a new alternator were all the truck needed.  Glen Greer then proceeded to close the gap until only an hour separated him from the lead position.  Now just hours from the finish, mired axle deep in silt, all seemed to be lost.  Nearby chase personnel soon came to the rescue and the 540 cubic inch monster was back underway.  Soon the KORE/Greer Class 8 rolled into Los Cabos for a First Place finish.

This was the first Mopar-powered Baja 1000 victory in over a decade.

“It was an amazing race for everyone,” said Kent Kroeker. “This is the most difficult point to point race in the world and our teams performed admirably.  In retrospect we could have done a few things differently, but all the money and preparation in the world probably wouldn’t have flushed out the gremlin that bit us.  The motor and suspension set up were perfect, the team was dialed and we could have won.  But like my Dad used to say, -If you had a whole bunch of should-have, would-have and could-have in one hand and 25 cents in the other, you could buy a doughnut.-”