San Diego, California – The “Peninsula Run”. Stretching over 1061 miles of Mexican desert from Ensenada to LaPaz, the trans-peninsular Baja 1000 is arguably the world’s toughest race.

Team KORE, veterans of desert racing and their 800 horsepower Class 8 General Tire Dodge RAM  race truck returned to Baja after their Class 8 win in the SCORE Baja 500 earlier this year.  Many on the team are veterans of the Marine Corps.  And at least one is still on active duty.  Co-driver Jeremy Graczyk volunteered his leave time to pit will alongside the rest of the team against the rugged Mexican terrain in the all out race for La Paz.

“We’re incredibly fortunate to have this team.” says KORE Suspension owner, Kent Kroeker “They volunteer their time, go without sleep, work heinously hard, and chase the race truck  all the way down the peninsula.  This team never gives up.  No matter what.”

Prior to the race, Team KORE and Kroeker spent two weeks in Mexico prerunning the course, and getting their logistics in place in preparation for the legendary desert race.   The influx of trophy trucks running the Baja 1000 meant that the course would get significantly altered even as the race goes on.   The Class 8 truck is well equipped to the task with General Tire Grabbers and a Mopar Max Wedge power plant equal or greater in size to most of the trophy trucks on the course.

“There’s so much that goes into being successful in Baja. Everything has to line up perfectly or you aren’t going to pull it off,” said Team Manager John Zambie. “So far we’ve blown up a new motor, got stuck in the silt, broke parts and experienced about every kind of human and/or mechanical failure you can imagine. I’m hoping to have used up all our bad luck during prerunning.”

On 17 November, the day before the race, the team was staged and waiting down the peninsula. Kroeker, co-driver Jeremy Graczyck, Jim Graczyk and Colt Hubbell left in the afternoon to prerun the first 30 miles of the race. About half way through the section they came upon a head-on accident that occurred between a race truck and passenger vehicle. Trapped inside the passenger vehicle was a man with critical injuries, including a partially-amputated arm. The KORE team stopped his bleeding with a tourniquet, secured the area and helped Mexican firemen extract him.

More information on this story can be found here:

The next morning combat veterans Kroeker and Graczyk climbed into the General Tire/KORE Race Ram to line up for the race. 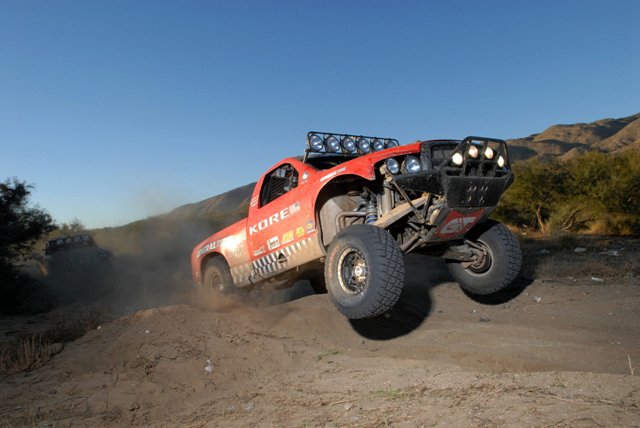 At high noon, the tall red RAM began the race in 5th position for the Class 8 trucks,  crossing the starting line, departing Ensenada and flying south on the dusty course. Within 50 miles Kroeker started feeling something wrong with the truck. A uniball in the steering assembly had lost a retaining ring and was wandering in its housing. A long pit ensued during which the team resorted to welding the bearing in place. During this time they lost numerous positions and were forced to drive in heavy dust.

At Race Mile 340, having regained some ground, Kroeker and Graczyk handed the truck to WRC Champion Harri Rovanpera and John Zambie. The team drove through the night, fighting low visibility due to dust and heavy fog, passing many disabled vehicles failing prey to the harsh terrain and eventually getting stuck themselves in silt beds north of Loreto. After much digging the team escaped and made it to KORE pit 7 where Rodolfo Iribe and Frank Martinek took over driving duties.

The sun sank in the Mexican sky as precise driving and navigating by Rudy and Frank brought the RAM race truck uneventfully across the finish line for a second place win in Class 8. Much to the chagrin of SCORE officials, the angry Iribe proceeded to display the power of the KORE race vehicle for the crowd of fans and rip out an 800 horsepower burnout on the finish podium, rendering it permanently damaged for the remainder of finishers. 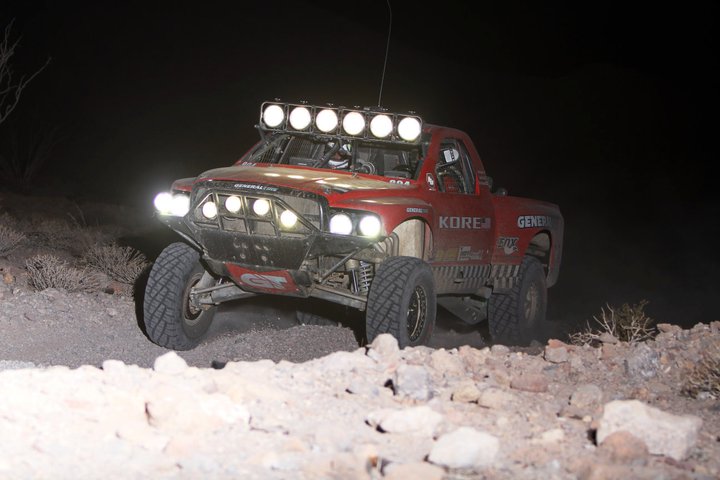 “We had a great overall season in Class 8 and either won or placed second in each of our three outings.  ” said Kroeker back in San Diego.  “Out of it all I’m more proud of our race team than anything else. Everyone did a great job.  We couldn’t ask for a more capable group of desert race veterans.  Our sponsors – General Tire, Fox Racing Shox, and Indy Cylinder Head gave their all to help us win. Everyone with us returned safely and it was another great adventure.” Kroeker paused before going on. “But let me make one thing perfectly clear: We don’t like second place. Not one bit.”